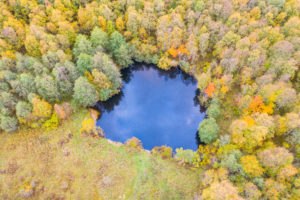 Romanov Battery
In 1907, after the defeat in the Russian-Japanese War (1904-1905), a new Tsarist state defence programme was created in which Tallinn played an important role. It was decided that a naval base for the Baltic Sea Navy would be established here and Tallinn and Porkkala naval fortresses were planned to support and block the mouth of the Gulf of Finland.

The battery was planned to fire to the seas in the west to as far as Paldiski.
On the high edge of the cliff, two rectangular 10 m deep (50 x 40 m) holes were created via an explosion 300 m south of the Suurupi Upper Lighthouse, containing planned artillery bases, ammunition depots, crew compartments, diesel generators and other items necessary for battery operation.

Battery workers were freelancers from Russia and Czech and Polish prisoners of war, who wore their Austrian-Hungarian uniforms.

Lupold Kann was the head of the feeding station at Suurupi Barrack Campus and Herbert Haljaspõld, a shopkeeper who was an ardent revolutionary. This certainly explains the delay in the construction work at Suurupi. In addition to the rise in steel prices during the outbreak of World War I.
The groove closer to the lighthouse was completed, and there are also talks about linking the caverns and possible passages to the lighthouse and the Viti fortresses.
Construction of the second groove was not completed because it was close to a spring. Because of this, the hole will never dry, and when viewed superficially it can be considered a normal pond.
The bodies of water known as boiler baths are inhabited by fish and crustaceans. Waterbirds live on the shores.

In the cavities, a concrete barrel was designed, with two 14″ cannons. The nearby old lighthouse is thought to have been planned as a fire control point.

The battery was never finished. Only two huge ~8m deep trenches were cut into limestone. Into the trenches Russians planned to build concrete casemates for ammunition, garrison, electricity generators, etc and intended to place rotating turrets with two guns on top of them. On the seashore of the NW and N coasts of the peninsula were planned two batteries with ten 130mm cannons altogether.

A branch of narrow gauge railway also connects the lighthouse.
During the Soviet period, the cavities were used by the soldiers of the adjacent Soviet Union Army for entertainment. In the winter, ice hockey was played in the groove and in the summer, a warm and deep body of water was used as a swimming spot. It was also used as a swimming spot by the habitants of summer area and Muraste Children’s Home; The body of water has also taken human lives.

During the period of regaining independence, a stolen car etc. were sunk in the first groove.

In reality, however, only the American Battery on the NW coast was completed by 1916. It had four 234mm cannons bought from the USA, hence the name American Battery. On the northern coast only concrete bunkers and gun platforms of the intended works were finished. Russian recolutions of 1917 were reasons why Suurupi naval fortress was never completed. 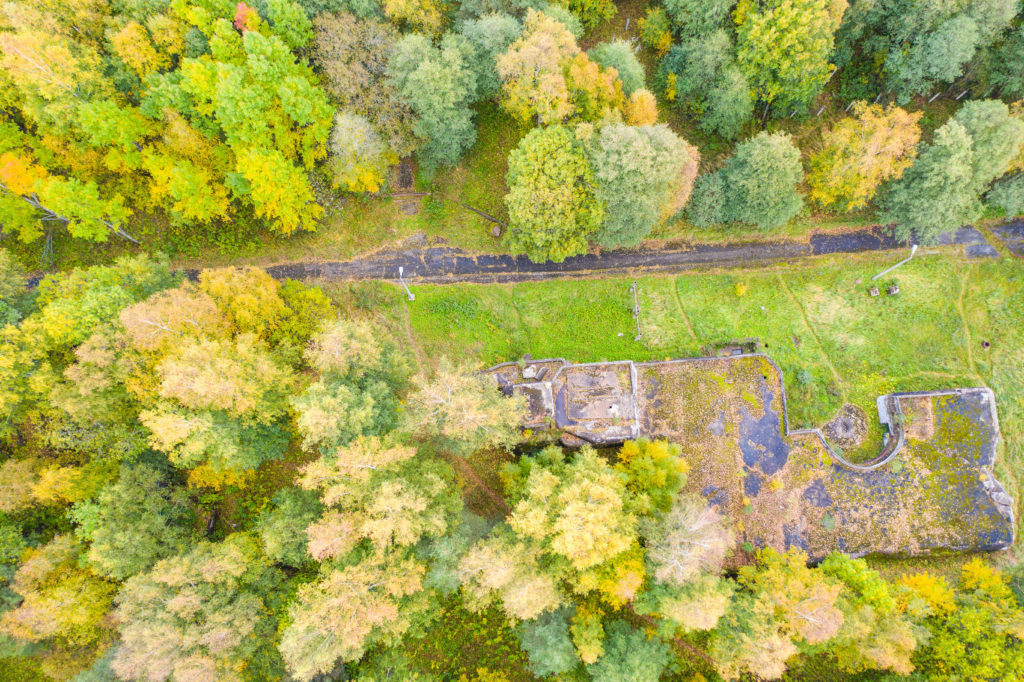 When German forces approached Tallinn at the end of February 1918 and Estonia declared itself an independent republic, Russian soldiers left for Russia from Suurupi. Before leaving they detonated the completed and ready-for-battle American Battery. In November 1918 the German occupation forces left Estonia and Red Russia invention gave a start to our War of Independence. Military activities took place in East Estonia at that time, far from Suurupi and there was time to restore the blasted-up battery. Restoration works began in July 1919 and by January 1920 the first 234 mm gun was ready for use, the second one was restored by the end of summer, the third gun by spring 1922 and the last, the fourth was given a complete overhaul in 1927.

By that time another coastal battery was installed in Suurupi with four 120mm Vickers naval guns mounted on World War I era battery platforms in 1925. Since January 1, 1927 two coastal defense batteries, their servicing installations and institutions formed Suurupi Command Headquarters. Third battery with two 76mm anti-landing cannons was added to the complex in the 1930ies.

Suurupi Command Headquarters of the Estonian Army finished its activities when Estonia was occupied by the Soviet Union in summer 1940. Suurupi coastal defense batteries became property of the Soviet Baltic navy. When the war between Germany and the Soviet union began in early summer of 1941 and the Wehrmacht approached Tallinn in August, the commander of Soviet Baltic navy, Vice-admiral Vladimir Tributs made Suurupi 234 mm battery concrete bunkers its headquarters. On August 28, 1941 he and his navy, however, had to leave for Russia in a hurry. Before leaving he gave orders to detonate two bunkers of his last refuge.

Can not find a data about Suurupi coastal defence batteries for 1941 – 1944, the years of German occupation. For the next 50 years of Soviet occupation, however, there are lots of mementos of material kind as well as some documents. The 120 mm battery of pre-war independent Estonian era was thoroughly renovated in 1950ies. Its weaponry was American origin – 127 mm guns sent to Soviet Union by the USA during World War II. An underground passage was dug between the cannon positions and about half a kilometer from the cannon positions a new command bunker with a rangefinder tower was built.

During our last occupation some military radio units were located in Suurupi as well. The left-hand bunker of the old American Battery concealed radio transmitting centre of 550th communications unit with an antennae field around it. Not far from it, on the coastal plain under the cliff were quarters of 1746th radio-technical battalion.